Showing posts from October, 2019
Show all

Her soul spills out of her body and she does not know it she does not know how her eyes light up like looming mountains touching the brightest stars and that poets only write what the wind whispers to her hair.
Read more

In Search of Beauty [Part I]

He hated the world So much That he hated himself He despised the world So much That he became the world… I He was not born to be a writer His soul was simply broken into pieces, like the alphabets And so he writes hoping that he might know who he was or who he is that as he puts back the pieces of his soul he might form a word or a name to call himself It is true that one may find wisdom when one is lost but it is also true  that one  can be lost forever He writes  under the light  of the full moon, re-creating beauty with a quill, parchment, and tears while she is asleep, dreaming the wildest dreams perhaps of some far-away kingdom catching butterflies and the whole world sleeps with her Indeed, he was not born to be a writer He was only broken into one.
Read more
More posts 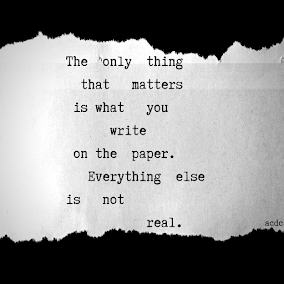